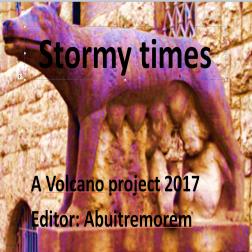 About this album:
Cover picture: Romulus and Remus, the sons of the Roman god of war, Mars.

The idea arose in conjunction with King1971. I would like to thank these musicians for the opportunity to work together and for their great works. Next, I also thank Akchen and Josepssv (volcano and support).

Stormy times call the world order into question. In the storm no one notices the targeted chaos in communication. Some see the war elephants and how a war machine on the ground and in the air sets in motion. Persevered slogans are issued, then the machines die and the war ethic is questioned. The regret at the tomb of the heroes comes too late. The big questions remain unanswered. Is everything repeating itself in stormy times?
Will we never learn from history?

Hey! Abuitremorem!! I really like this album concept, where a story is told about the titles. The titles are what can join an album in a song, thanks for the idea and for your compilation. Like a movie. Volcano!!

Very cool album with a lot of interesting and atmospheric tracks. Definitely worth listening to!!

Fantastic Expression of moods of of our Times

Rene put together music that has messages of concern for the future of the world expressed in music including Rene's creative wonders. The mixes by Rene and others are so professional! Thank You Rene for including me with these Great musicians.

An amazing concept album René !! Each track has a great expression, I really like very much. It's a great journey thru your musical mind, with a multifaceted view on the Life and Earth. Much fun to listen. Thanx very much René for beeing a part of it :)

Rene has truly told a story here in this cleverly assembled collection. One that we all should pay attention too. Thanks Rene for including me. Glad to be a part of it.

Charting the unexplored edges of the aural continuum. A fascinating journey through the unique and wonderful music of my friend Rene. I like minded musical soul. Great work on this by all contributors.

Thanks for including me Rene. Great selection of tunes.
wikiloops online jamsessions are brought to you with friendly support by:
ALawrence1 from United States

"This site is a dream come true! Thank you for everything!"