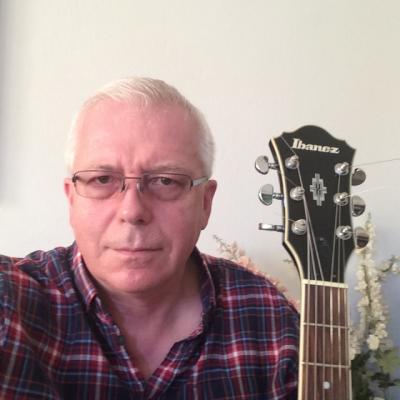 I had a band at college, then I got married, sold my guitars and I have led a very happy life for the next 30 years. Not that music was absent, but I was just a listener and attendee to many different gigs. Then, on June 1st 2013 I went to a music store, bought myself a guitar and started again. Since then there is not a day without playing, and if it happens it is a lost one. We have now a band at work and we sometimes play gigs for our team, including colleagues from other countries.

I grew up with: Beatles, Deep Purple, Yes. My big inspirations are jazz guitar players John Scofield and Mike Stern. But the true guitar guru for me is John McLaughlin. Last autumn we flew wth my wife to Milano just for one night to catch him and the 4th Dimension at Conservatory. It was worth it!

In every-day life I am a director in a corpo, linked to life sciences and healthcare. By education I am a vet doctor, and apparently the animals all over the world are not aware how lucky they are that I never became a practitioner

Mac Dab is being followed by:

wikiloops online jamsessions are brought to you with friendly support by:
Evosaki900 from United States

"I supported Wikiloops not for their name, I support it because it was a great idea & is a great way for musicians to jam outside their circles. "