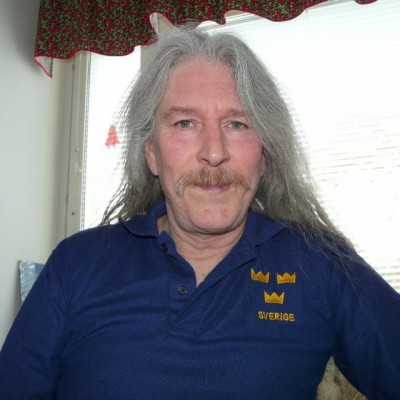 Grew up in Stockhom. Started to play around 8 years old but more regarly when I was 16. Was playing bass and guitar in some bands in the late 70`s-early 80`s. Grew up with Black Sabbath, Nazareth, Deep Purple, Budgie, Ten Years After, Frank Zappa with more. Gary Moore is probably my all time favorite if I must chose some but I have pretty broad taste

My partner Janice have been singing in a church rockband for 10 years in Chicago area. She`s also playing flute and piano.

We have both been singing in a Gospel choir. Right now I`m singing in a little group with 5 singers, guitar, piano. We are very expensive! We want a cup of coffe for playng at hospitals, older houses and things like that. The music goes wide from religios Elvis to Pavarotti. We practice once a week, coffe talk and have some fun

Other hobbies.
I have been a pretty good hockey player without bragging. Have been playing with and against some who took the step over to NHL. Wasn`t bad in fotball either! All from my childhood remember my skating and hard shots

Photo is some other hobby, I`m self learned there too like with anything else. Can not work after paper instructions. Have been working as a Carpenter, Truckdriver, Painter, almost heavy body work, I`m like a monkey without brain hahahaha.

I have a 100 w Simms-Watts Ike Isaacs amplifier who I got from a close friend, thankyou Leif!. Sounds pretty good, have never really used it to bother my neighbours:-) I also have an old Marshall 20 W who is easy to carry with you, but its the same with that one. My best sounding guitar amp is some old Thorn tube stereo who knocked my socks of!!!!! I can`t belive it! Sounds fantastic!!!!!
Purchased newly a ZOOM G5 multi effect and I must say it has everything I need. Good unit for the half price against some competitors who I can`t say anything about?

PC with TC-Electronic Konnekt 24d firewire interface.
ZOOM G5 guitar multi effect
Rode Nt2a Michropone
Cubase 4 before but from now using Mixcraft 6 and I like it!

akethesnaker is being followed by:

wikiloops online jamsessions are brought to you with friendly support by:
HiFiFlutes from United States

"Wikiloops is my music instructor ! The musicians I have met here are extremely talented and wanting to be helpful.. always with a smile :) Thanks !!"