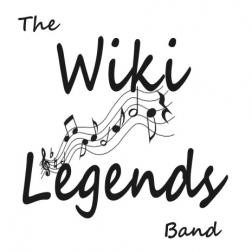 About this album:
Indeed, the project started with good intentions and I think we did do a few good tunes, thanks to all involved and special thanks to Glen (DrStrgeglv) who took the time to make sure some tunes were selected and published in a playlist and it was his suggestion I actually make an album. Thanks to any and all guests on some of our tunes. Glen already wrote something ages ago, so I am going to let him introduce this in his own inimitable way. Glen speaks:

"Last year, Ernie440 had a dream... that dream became, "The Wiki Legends Band". The lineup included Ernie, RP3drums, Arnosolo, Me, and Major3rd. We started off with great enthusiasm and high expectations. Then later it became a lot of work and less fun, so naturally we all came back to the general population and abandoned our project. This is a compilation of some of our more finished work, along with a few other songs which included most of us playing with honorary legends in their own rite. Major3rd played a MAJOR role here, but alas.... he never got to the authorization part, so he appears in "ghost" form only... so sad. Hope you like!"

it's a cool experience listen to you guys:W :) good work!:W

We had really some fun with this project ! Thx my friends for the great moments we shared ;-)

What a great bunch of guys and players..cream of the crop! Great songs and album! cheers!!!

nice to hear a collection of songs that has direction and a consistent group of guys working on them......Super Guys......Thanks Ernie for collecting it all.

Thanks for doing the extra work to put this album together! Contributing to this project was an honor of the highest level! It gave me a sense of purpose and comradery while everything else in the "real" world was caving in from all sides. For a couple months we all behaved like professional song creators! I hope that effort is reflected in the listening experience for those who never knew what we were doing behind the curtain! YAY!
wikiloops online jamsessions are brought to you with friendly support by:
Harpmarc from Germany

"Der Gedanke hinter wikiloops gefällt mir! Daher unterstütze ich gerne.. I like the idea of wikiloops - therefore I support it.."