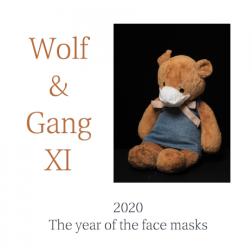 About this album:
My 11th album with the Wikiloops gang of awesome cool cats.

First I doubled some lovely melody from Filo974 and the SilverOne, then played on a cool Irish tune with a story from Brian and what seemed like the other view of almost the same story from Shi (who 'stole his heart just for safe-keeping') :D Awesome template from fanne as well...

Tried some new sound setup with Mark 'Fishi' (and played more or less the same figure for 5 minutes), then heard and played the melody on FrankieJ's awesome track.

After this, a polyrhythmic tune with Filo again, and after that I got my hands kind of dirty with all fuzz effects I could find :)

Then Al gave me the honour on my take on Mark's samba drumming - he made something wonderful out of it, merci beaucoup!

Even more wonderful: Peter's work on my simple triad / simple bass theme - he first took it to France, then made almost a Klezmer tune out of it; bravo and thanks a lot my friend :)

Then I tried some old-school funk on Mark's drums, and Marc and FrankieJ turned it into magic :) Next I dug out some older but very cool dub from rastafari and Shi...

... and then got message that Clay, our 'BigDaddyCee' had left us. So let me just include my second remix of one of his tracks, which he had approved in a nice comment on that one - gonna miss you my friend, rest in peace!

Lastly, some first ones: some saw my take on Mike's track as 'dark', and I've tried to understand what seemed to be Andri's crush on a former teacher? Wonderful colours in that one, mi amigo, gracias!

Thanks to Richard and the rest of the gang as usual, having Wikiloops in these difficult times is so great! Love you all... and I hope you'll like this compilation of mine :)

Honored to be included in your works friend :)

I listened to it yesterday, very cool and cultured collection. Well done all of you!

Many moods and various sounds combined to make superb music. Lots of good engineering/mix ideas that have worked so well.

WOnderful album Wolfgang ! Superbe melting pot de styles musicaux. Thank you to all these talented musicians here and elsewhere on WL. Glad to be included on it :):)

nice to be included here amongst so many wiki talents and fine songs, thanks Wolfgang :)

thanks for including me in this fantastic album,amigo Wolfgang
wikiloops online jamsessions are brought to you with friendly support by:
Shi

"Wikiloops gives me the chance to enjoy making original music with so many talented musicians and have fun and be creative too. It's amazing !"